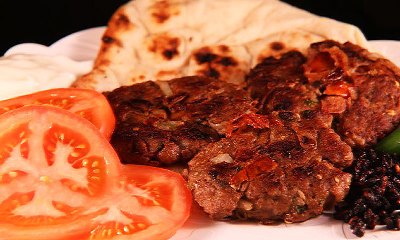 My cousin was a cadet at the Kimari Naval Base, and most of his weekends were spent at our home. The best part of his visit was the drop off to the Kimari Naval Base in the night, for on the way back my parents invariably made a stop at the dhaaba, where the garam naan andchapli kabab became a staple Saturday night dinner.

Come every Saturday morning, when I heard Azim bhai ring the doorbell my anticipation for the dinner that night would start. I could taste the flavour of the anardana and tomatoes wrapped in hot naan, the thin layer of fat on the roof of my month, and thus my belief that there is no better kabab than the authentic Peshawari chapli kabab; and here is its story.

The kabab, like most of the Food Stories covered, also has an ancient history. It has traveled far and wide through regions, times and people and has a universal appeal. Undoubtedly the most recognised eastern food in the western part of the world, it has remained a favourite with desis, middle easterners, Arabs, central Asians and Caucasians alike.

It is believed that the Turkish and Persian soldiers enjoyed grilling fresh meat on fire, while it hung wrapped on their swords. The meat chunks were cooked in animal fat and once ready were consumed immediately by soldiers who hunted for survival while journeying land to land for conquests.

Kababs have always been a rustic favourite; and while they were said to be a prominent part of the Moghul menu, the variation of the modern day chapli kabab is a purelyPakhtun take on the kabab.

The word kabab is said to originate from the Arabic language, but the Persians, Turks and central Asians also lay claim to it. It means to fry, burn or cook on a skewer through grilling or open fire cooking. Kababs in the west are mostly served on a skewer ordonar kabab with a side of pilaf or middle Eastern pita bread. Though in the subcontinent, there are more than a dozen popular kabab recipes; shami, boti, seekh, bihari, galavati all come a close second to the Peshawari chapli kabab.

The province formerly known as NWFP and the eastern region of Afghanistan can proudly lay claim to the spicy flat meat beef patty, however, it stands as a favourite throughout Pakistan and India. Though some kababs are made using sheep, lamb, chicken or goat meat, the chapli kabab is a purely beef, and at times lamb fare.Chaprikh is a Pashto word meaning flat, and chapli is a derivation of this particular word; hence a flat round kabab. The Pakhtun recipe uses a perfect combination of beef and atta (wheat flour), thus this kabab in particular is lighter in taste.

The ingredients used in the preparation of chapli kababs are indigenous to Afghanistan therefore the use of pomegranate seeds and dry coriander seeds, which make thechapli kabab so unique in taste. The outcome is perfect on the palate and thus the region and the original chapli kabab makers deserve the highest grade on sharing this delicious local classic with the rest of the world.