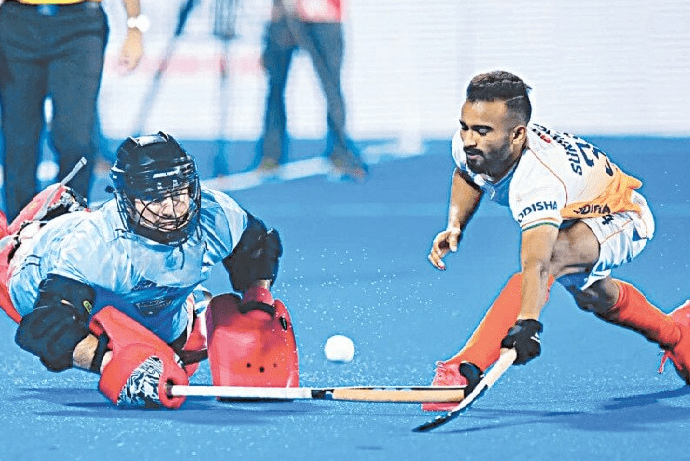 BHUBANESWAR: India suffered an early exit from the hockey World Cup after the hosts lost 5-4 to New Zealand on penalties in a dramatic crossover match on Sunday.
Fancied India, led by defender Harmanpreet Singh, needed a win to make the quarter-finals of field hockey’s biggest tournament and had the home fans on edge after the match ended 3-3 in Bhubaneswar.
New Zealand came back from 3-1 down to level the contest and then held their nerve as the penalty shootout went to sudden death.
Sean Findlay starred for New Zealand, ranked 12th in the world, scoring the goal that forced penalties and then twice converting in the shootout as the underdogs celebrated at the Kalinga Stadium.
Sixth-ranked India once dominated men’s field hockey, winning eight Olympic gold medals between 1928 and 1980.
The former national game of the cricket-mad nation witnessed a revival after India won bronze at the Tokyo Olympics and followed it up with a Commonwealth Games silver in Birmingham last year.
Australia, holders Belgium, the Netherlands, England and Spain have also secured their place in the quarter-finals.
India scored through Lalit Upadhyay (17th minute), Sukhjeet Singh (24th) and Varun Kumar (40th).
New Zealand replied through Sam Lane (28th) and two penalty-corner conversions by Kane Russell (43rd) and Findlay (49th).
New Zealand will now take on reigning world champions Belgium in the quarter-finals.
Earlier, Spain emerged victorious by the end their thriller against Malaysia to set up their quarter-finals date with title favourites Australia.
The two sides were locked at 2-2 at the final whistle before Spain won 4-3 in the penalty shootout.
The scoreline read 0-0 at half time before Faizal Saari put Malaysia ahead in the 35th minute but Marc Miralles (41st) and Xavier Gispert (42nd) scored in quick succession to put Spain 2-1 up.
Shello Silverius then scored a fine field goal to equalise for MalaysiaIn the penalty shootout, it was 3-3 after the first set of five players took their shots. Firhan Ashari, Saari and Suhaimi Shahmie Irfan scored for Malaysia, while Marhan Jalil and Silverius missed. Miralles, Bonastre Jordi and Gispert Xavier scored for Spain while Alvaro Iglesias and Marc Reyne failed to score.
As the two teams were tied 3-3, sudden death was applied. Spain’s Miralles scored while Ashari missed.
Spain, who had finished third in Pool ‘D’ behind England and India, dominated the match with a lot of circle penetration but the speedy Malaysians were impressive in the counter-attack. Spain got as many as eight penalty corners but wasted all of them. Malaysia earned one PC which they could not convert.
Malaysia were able to put the ball in the Spanish goal in the first minute of the fourth quarter but the goal was disallowed with the umpire ruling that the ball had touched the back stick of Saari.