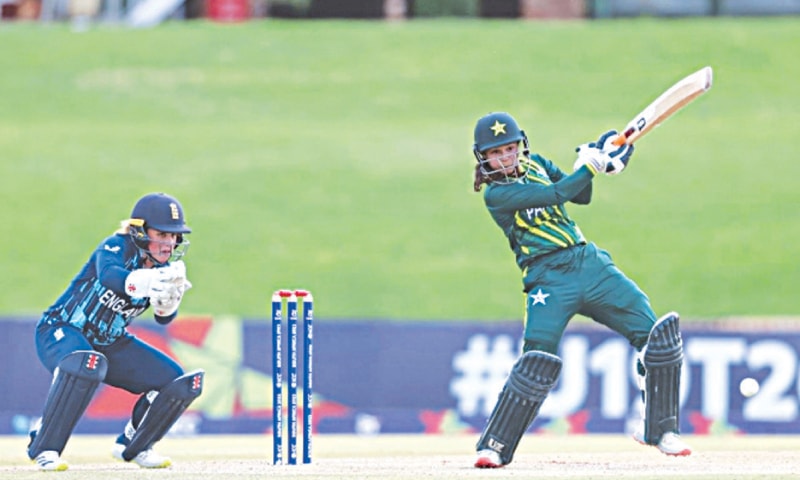 POTCHEFSTROOM: Pakistan lost to England by 53 runs in their second match of the ongoing ICC Women’s U-19 World Cup in Potchefstroom, South Africa on Tuesday.
Chasing 157, Pakistan were bundled out for 103-5 as England’s Sophia Smale took two wickets. Pakistan skipper Syed Aroob Shah was the pick of the batters for the side 34 off 36 balls. Aroob hit five boundaries during the knock.
Opener Shawaal Zulfiqar’s 25 off 32 balls — which included four boundaries — and contributions of 16 and 12 by Aliza Khan and Areesha Noor respectively down the order were helpful in saving Pakistan from a defeat by a bigger margin.
Earlier, England were lifted by Seren Smale and Ryana Macdonald-Gay after Pakistan had reduced them to 43-3 by the end of the sixth over. Smale was involved in a 37-run partnership with Niamh Holland for the third wicket before combining for a fourth-wicket stand of 32 with Macdonald-Gay, who remained unbeaten at 35 off 22 balls, hitting three fours and a six. Wicket-keeper/batter Smale, meanwhile, added 37 off 33 with the help of six boundaries.
Areesha, Zaib-un-Nisa and Anosha Nasir took two wickets each for Pakistan while Rida Aslam bagged a scalp as England were restricted to 156-7. England could have posted a lower total had Pakistan held on to a few catches.
Summarised scores:
ENGLAND WOMEN’S U-19 156-7 in 20 overs (Seren Smale 37, Ryana MacDonald-Gay 35, Grace Scrivens 24; Anosha Nasir 2-20, Zaib-un-Nisa 2-24, Areesha Noor 2-34); PAKISTAN WOMEN’S U-19 103-5 in 20 overs (Syeda Aroob Shah 34, Shawaal Zulfiqar 25; Sophia Smale 2-10).