Most powerful telescope sets off into space 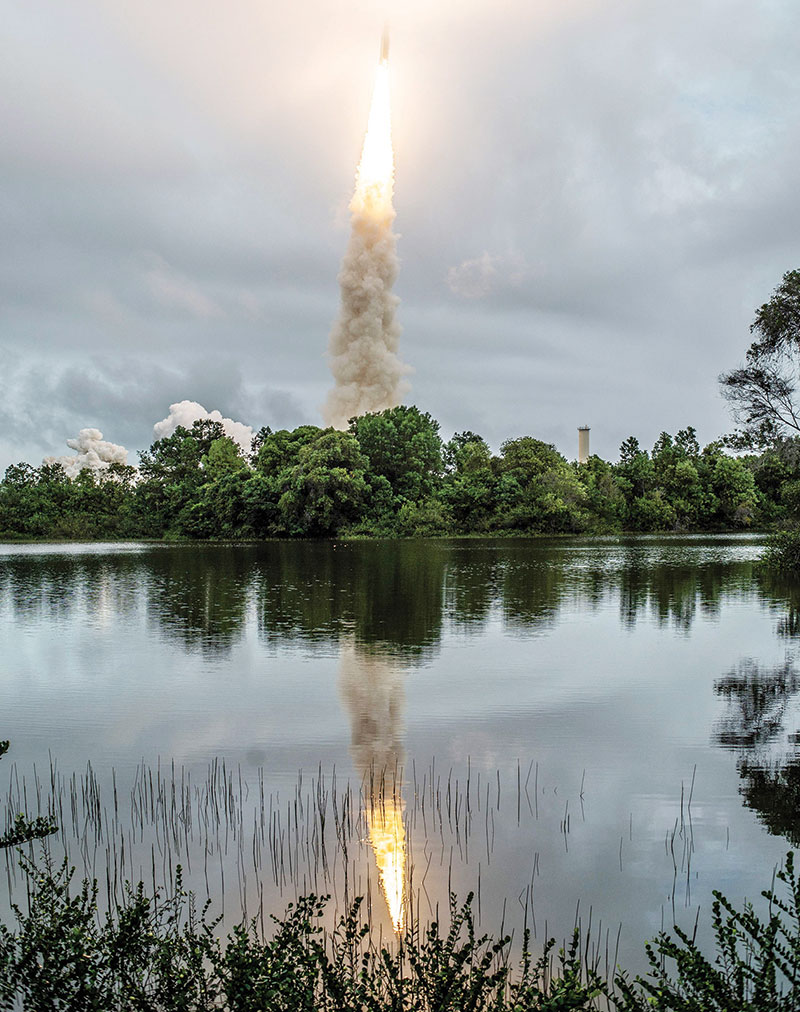 KOUROU, France: Arianespace’s Ariane 5 rocket with NASA’s James Webb Space Telescope onboard lifts up from the launchpad at the Guiana Space Center yesterday. – AFP
KOUROU, France: The world’s most powerful space telescope yesterday blasted off into orbit, headed to an outpost 1.5 million km from Earth, after several delays caused by technical hitches. The James Webb Space Telescope, some three decades and billions of dollars in the making, left Earth enclosed in its Ariane 5 rocket from Kourou Space Centre in French Guiana.
“What an amazing day. It’s truly Christmas,” said Thomas Zurbuchen, head of scientific missions for NASA, which together with the European and Canadian space agencies, ESA and ACS, built the telescope. ESA chief Josef Aschbacher said he was “very happy to say that we’ve delivered the spacecraft into orbit very precisely… that Ariane 5 performed extremely well”.
This was key, since placing the spacecraft in orbit helps economize on the fuel the telescope will need to reach its final destination and perform well after that. It is expected to take a month to reach its remote destination. It is set to beam back new clues that will help scientists understand more about the origins of the Universe and Earth-like planets beyond our solar system.
Named after a former NASA director, Webb follows in the footsteps of the legendary Hubble – but intends to show humans what the Universe looked like even closer to its birth nearly 14 billion years ago. Speaking on social media, Webb project co-founder John Mather described the telescope’s unprecedented sensitivity. “#JWST can see the heat signature of a bumblebee at the distance of the Moon,” he said. All that power is needed to detect the weak glow emitted billions of years ago by the very first galaxies to exist and the first stars being formed.

The telescope is unequalled in size and complexity. Its mirror measures 6.5 m in diameter – three times the size of the Hubble’s mirror – and is made of 18 hexagonal sections. It is so large that it had to be folded to fit into the rocket. That maneuver was laser-guided with NASA imposing strict isolation measures to limit any contact with the telescope’s mirrors from particles or even human breath.

Once the rockets have carried Webb 120 km, the protective nose of the craft, called a “fairing”, will be shed to lighten the load. To protect the delicate instrument from changes in pressure at that stage, rocket-builder Arianespace installed a custom decompression system. “Exceptional measures for an exceptional client,” said a European Space Agency official in Kourou on Thursday.
Crew on the ground were to know whether the first stage of the flight was successful about 27 minutes after launch. Once it reaches its station, the challenge will be to fully deploy the mirror and a tennis-court-sized sun shield. That intimidatingly complex process will take two weeks and must be flawless if Webb is to function correctly. Its orbit will be much farther than Hubble, which has been 600 km above the Earth since 1990.

The location of Webb’s orbit is called the Lagrange 2 point and was chosen in part because it will keep the Earth, the Sun and the Moon all on the same side of its sun shield. Webb is expected to officially enter service in June. – AFP