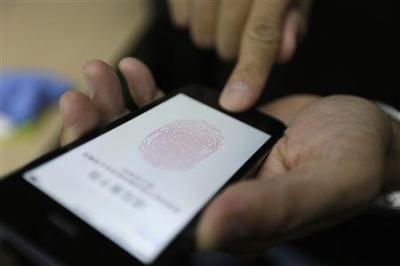 A micro venture capital firm joined a group of security researchers to offer more than $13,000 in cash along with bottles of booze, Bitcoin currency, books and other goodies to the first hacker who breaks the device in a contest promoted on the website

Arturas Rosenbacher, founding partner of Chicago's IO Capital, which donated $10,000 to the hacking competition, said that the effort will bring together some of the hacking community's smartest minds to help Apple identify bugs that it may have missed.

"This is to fix a problem before it becomes a problem," he said. "This will make things safer."

The publication said that it is possible to bypass the lock screen of those devices in seconds to access photos, email, Twitter and other applications. It included a video demonstration on its website and advice on how users could thwart the bypass technique: onforb.es/16IU6Y3

Apple spokeswoman Trudy Muller told Reuters that the company was preparing a fix that it would deliver as an update to iOS 7 when it was ready. "Apple takes user security very seriously," she said.

Among those getting ready for the hacking contest is David Kennedy, a former U.S. Marine Corps cyber-intelligence analyst who did two tours in Iraq and now runs his own consulting firm, TrustedSec LLC.

"I am just waiting to get my hands on it to figure out how to get around it first," the founder of the DerbyCon hacking conference told the Thomson Reuters Global Markets Forum this week. "I'll be up all night trying."

Security experts worry about the implications of using the module to grant access to sensitive data on the phone and potentially enabling mobile purchases.

The fingerprint scanner on the top-of-the-line iPhone lets users unlock their devices or make purchases on iTunes by simply pressing their finger on the home button. It has been hailed as a major step in popularizing the use of biometrics in personal electronics.

Security engineer Charlie Miller, known in hacking circles for uncovering major bugs in the iPhone as well as circumventing security in Apple's App Store, said it could take fewer than two weeks for Kennedy or some other smart hacker to get around the new lock.

Once they're in, they could gain access to the cornucopia of data typically stored on a user's iPhone and might potentially be able to buy goods from iTunes and Apple's App store.

Miller declined to comment on the hacking contest or potential security vulnerabilities in the fingerprint reader.

To be sure, experts say they know of nothing intrinsically wrong with Apple's fingerprint reader, based on what the company has so far disclosed. Reviewers this week gushed over its ease of use and reliability.

The reader's sapphire crystal sensor is embedded in the phone's home button and reviews the fingerprint as a user touches it to verify his or her identity.

Data used for verification is encrypted and stored in a secure enclave of the phone's A7 processor chip. No information is sent to any remote servers, including Apple's iCloud system.

HD Moore, a hacking expert and chief researcher with the security software maker Rapid7, said such protections mean "the bar is a little bit higher," but that certainly won't discourage hackers from trying to break the new technology.

"This is definitely something to target and something people will want to go after," he said.

All major electronics products are subjected to similar scrutiny as new features are rolled out, including devices from Google Inc, Microsoft Corp and Samsung Electronics Co.

For example, in 2012, Charlie Miller led a team that demonstrated techniques for taking over smartphones running Google's Android software through their use of near-field communications, or NFC, a wireless technology used for sharing data or making purchases at point-of-sales terminals.

Bugs are often disclosed by "white hats," hackers who unearth flaws and report them so manufacturers can repair them, preventing criminal exploitation. The hope is the good guys find them before "black hats" uncover them.

White hats have found multiple security issues with iPhones, iPads and in the App store since Apple launched its first smartphone in 2007. They say that scrutiny has helped make it one of the most secure devices on the market today.

Apple executives said at last week's iPhone launch that the new fingerprint reader, dubbed Touch ID, will help make phones far more secure by dint of its ease of use.

About half of all smartphone users don't bother to use current screen-locking technology because of the inconvenience of keying in multiple-digit passwords. Apple is betting users may be far more willing to avail themselves of a solution that requires a single finger-swipe.

"The technology within Touch ID is some of the most advanced hardware and software we put in any device," Dan Riccio, senior vice president of hardware engineering, said at the event.

Kennedy said he needs to examine the new iPhone to figure out how to best attempt an attack.

He said his choices include hacking the software that analyzes the fingerprint data, or physically opening up the phone and connecting it to a custom-built device that would impersonate Apple's fingerprint reader.

He added that it might be possible to lift a user's fingerprint from elsewhere on the device and somehow make a clone of it.

Rich Mogul, an analyst with the security research firm Securosis, said he planned to use it and expects it to be widely adopted despite the fact that hackers are circling.

"Nobody has gotten their hands on it to see what the weaknesses are and how easy it is to crack," Mogul said.