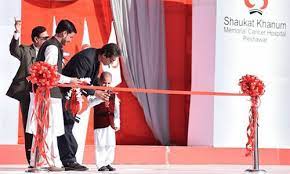 ISLAMABAD: PTI Chai­r­man Imran Khan on Satur­day admitted to investing funds donated to the Shau­kat Khanum Memorial Trust (SKMT) in a private housing project, though he clarified that the amount was later returned to the trust.
The revelation came during the hearing of a Rs10 billion defamation case that Mr Khan filed against PML-N leader Khawaja Asif, now the defence minister.
Additional District and Sessions Judge Umeed Ali Baloch conducted the proceedings, attended by lawyers of both parties. Mr Khan joined through video link from his residence in Lahore’s Zaman Park.
During the cross-examination, Mr Khan disclosed that SKMT’s board of directors informed him about investing in the private housing society.
Ex-PM clarifies matter was closed after Shaukat Khanum board members returned $3 million
Mr Asif’s counsel, Barris­ter Haider Rasool, put a question to Mr Khan regarding the investment in a construction project, to which the PTI chairman admitted the fact but stated that he did not remember the name of the housing project.
Mr Khan said that he also did not remember whether the board informed him through writing and that the board members returned $3 million and the matter was settled.
Barrister Rasool argued that the matter was not settled as the dollar’s rate was Rs60 at the time of the investment and it doubled to Rs120 when the investment matured.
After the counsel reques­ted the court to adjourn proceedings and insisted that he would conclude the cross-examination during a couple of hours in the next hearing, Mr Khan quipped that cross-examination would not take much time if the lawyer had not tried to twist the proceedings and come straight to the point.
The former premier said the matter could be resolved early if the case was handled truthfully. The court then adjourned the hearing.
Mr Khan filed the Rs10bn defamation suit against Mr Asif in 2012 for levelling allegations of misappropriation and money laundering through the SKMT funds.
In his suit, Mr Khan referred to Mr Asif’s Aug 1, 2012 press conference in which the PML-N leader had alleged that the PTI chief had lost a huge amount of funds donated to the SKMT in “real estate gambling”. The funds, he said, were given to the trust in the forms of zakat, fitrana and other kinds of donations.
Recording his statement to the court in January 2022, Mr Khan said he was the biggest individual donor of the SKMT from 1991 to 2009 and the trust fully recovered the investments in question without any loss.
Mr Khan said “fabricated and baseless allegations” were made to undermine people’s confidence in the trust.