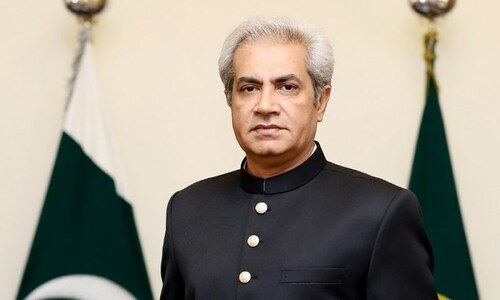 LAHORE: The federal government, in a late night announcement, notified that Punjab Governor Omar Sarfraz Cheema has ceased to hold office on the advice of the prime minister sent to the president on April 17 and reinforced on May 1.

A hectic day that eventually concluded with the issuance of a notification by the Cabinet Division, President Dr Arif Alvi earlier rejected Prime Minister Shehbaz Sharif’s advice to remove the Punjab governor dampening the PML-N’s hopes that the office will be vacated in a day or two.

Dr Alvi rejected the prime minister’s summary using Article 101(3), which says the governor shall hold the office “during the pleasure” of the president (for as long as the president pleases).

Punjab Governor Omar Sarfraz Cheema also banked on articles 101(3) and 48(2) that he has even referred to in several tweets, saying the automatic implementation of the prime minister’s advice takes effect after the period during which the president has to act on it has lapsed, but not in the case of the removal of a governor.

Earlier in the day, firebrand Interior Minister Rana Sanaullah of the PML-N had advised Governor Cheema to go home respectably and ensure he as well as President Alvi did not indulge in any activity that would lead to the public wrath in the days to come. “The president is bound to implement the prime minister’s advice, and any deviation will tantamount to a violation of the Constitution,” he asserted.

Mr Sanaullah had said Mr Alvi and Mr Cheema should follow the Supreme Court’s order that stated the president neither had any ‘inherent’ or ‘residual’ powers, adding a president was only a figurehead in a parliamentary democracy who had no veto powers.

Sensing the government’s strike, Governor Cheema had tweeted that the “Sicilian mafia” had held Governor House hostage and was “all set to attack the office with unconstitutional summaries and notifications”.

The federal government notification also mentioned that the Punjab Assembly speaker shall perform the functions of the governor till the appointment of an incumbent, in accordance with the Article 104 of the Constitution. This development not only changes the situation at Governor House, but also in the Punjab Assembly as Speaker Chaudhry Parvez Elahi will have to vacate his office for taking over as acting governor, and Deputy Speaker Dost Muhammad Mazari was said to be inclined towards the PML-N.

The speaker and the deputy speaker are both facing no-confidence motions in the House.

Earlier on Monday, the president’s official Twitter handle posted on Monday: “The President has conveyed to the Prime Minister of Pakistan that Governor Punjab cannot be removed without his approval.”

In his note declining the prime minister’s advice, the president had written that the incumbent governor could not be removed as there was neither any allegation of misconduct nor conviction by any court of law or of any act committed by him contrary to the Constitution. “It is my duty as Head of the State to represent the unity of the Islamic Republic of Pakistan in terms of Article 41 of the Constitution,” the president stated.

As the removal of the PTI-installed governor got delayed with each passing day, the PML-N-led coalition government in Punjab got jittery as it was unable to constitute the provincial cabinet. The PML-N has been delaying the formation of a cabinet since Hamza Shehbaz took oath of the office of chief minister on April 16, fearing Mr Cheema would not administer oath to the provincial ministers.

The governor had also refused to administer the oath to Hamza against the Lahore High Court’s advice, which later directed the National Assembly speaker to carry out the job.

The president in his note to the prime minister also highlighted the governor’s constitutional role, stating Mr Cheema had sent him a report regarding the unfortunate happenings in the Punjab Assembly, questioning validity of the resignation of former chief minister Usman Buzdar, and switching of loyalties by PTI dissident MPAs.

Rejecting the advice of PM Sharif, President Alvi said he was convinced the removal of the governor would be unfair and against the norms of justice. He emphasised that it was essential that the incumbent governor continues to stay to encourage and promote a healthy and clean democratic system where members were not coerced or bought to bring about an illegitimate change, and Article 63A of the Constitution specifically discouraged such activities.

The president also highlighted that he was committed to stand by the provisions of the Constitution in these difficult times, and strongly rejected the advice of the prime minister to remove the Punjab governor.

Meanwhile, following Interior Minister Sanaullah’s warning, Governor Cheema had taken to Twitter to express his fear that the “Sicilian mafia” was all set to attack his office with unconstitutional summaries and notifications.

In another tweet later at night, he wrote: “The threatening and inflammatory statements of the attorney general and interior minister may lead to a civil war. Both of them have proved they are courtiers, thugs of the Raiwind palace.”

He further said he had managed to control the situation when Governor House was “held hostage”, but warned if it was “attacked” again the result would be different and a civil war may ensue. Cheema went on to say the prime minister, interior minister, attorney general and the “unconstitutional” chief minister of Punjab would be responsible in such a situation.