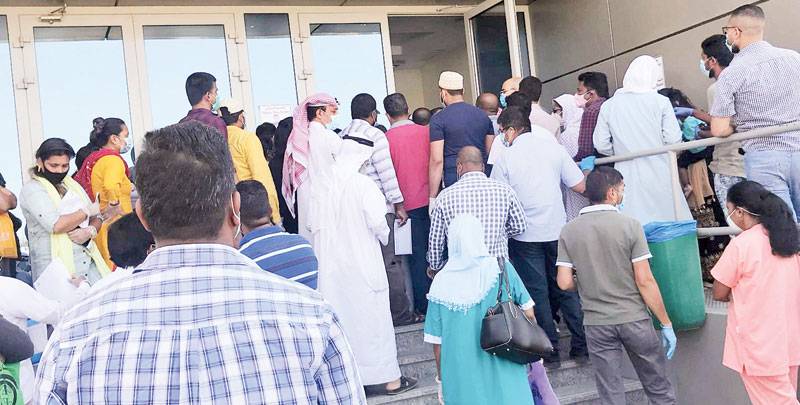 KUWAIT CITY, May 9: The Migrant Labor Medical Test Center in Shuwaikh area, despite the good organization outside its gates, is overwhelmed with hundreds of workers. The mass return of the workers to the country has caused heavy congestion, amid the mobilization of employees and the operation of the center at its full capacity to receive migrants and finish their medical tests, reports Al-Rai daily.

An official in the center revealed that 2,000 workers are tested daily. He said, “We receive individuals from 8:00 am to 1:00 pm. We then receive company workers from 2:00 pm to 5:00 pm. Despite this, the pressure is great and the congestion continues due to the mass return of migrant workers”. The official affirmed the center’s ability to reduce overcrowding to a large extent, and regulate the entry of workers into the internal halls and in the places designated for rest until they are tested.

He said, “The number of workers who left for their countries during the COVID-19 crisis is estimated at hundreds of thousands. There is no doubt that their return in large numbers necessitates time, effort and an additional number of medical staff to finish their tests. We have spared nothing in this aspect”.

Regarding the reason for the delay in increasing the medical test centers or enhancing the number of employees, the official said, “There are currently four test centers that cover all regions and are staffed with hundreds of employees. Doubling these centers is in the hands of the Ministry of Health depending on its available capabilities.

The intensity of overcrowding decreased during the past days compared to its first days. It will decrease significantly with the opening of the field medical test center in Mishref very soon”.

In the same context, an educational source indicated that the overcrowding in the labor test centers led to delays in the procedures for the recruitment of about 232 cleaners who applied for appointment in the Ministry of Education.

He revealed that the delay in testing expatriate workers does not affect private companies alone but also all sectors of the country that need manpower, including foreign schools that are waiting for the issuance of medical certificates for thousands of drivers in order to start operating buses that transport students with their full capacity and numbers, in addition to cleaners who have become a rarity in educational institutions.