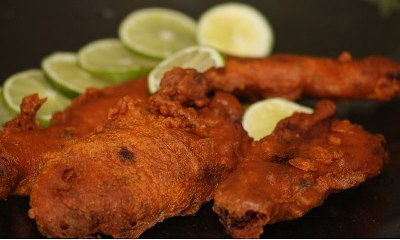 Sometimes a season, a picture, a memory can bring the taste of a particular food with it. One can almost taste it, smell it, savour it and the understanding that the only thing standing between me and the food is a delightful realisation, that now all I have to do is pick up the ingredients, put on an apron and get cooking; and voila, Lahori Fish is ready to be served.

Lahori Fish, this one sent me to the kitchen fast and to the grocery store faster. Once the fish, my favourite white meat, was set to marinade it gave me some time to research the history behind this delicious dish.

What’s the story of the fried fish? Is it its tender yet crisp texture that keeps us coming back for more? Or perhaps the simple fact that once caught, or bought, it takes a dash of butter, red pepper, salt, garlic, ginger and ten minutes on the skillet or karahi and you have dinner that’s a winner!

It is famously said in Don Quixote Hunger is the best sauce in the world and since peasants have a lot of it they always eat with zeal and zest. Yes, fish was a food of the coastal poor, and the ones living by rivers and lakes. And then ironically fresh fish jumped ship and became rich man’s food.

The bawarchees from the house of Mughals, under the influence of the cooks of Awadh, modern day Lucknow, decided to marinade the treasures of the sea and cooked and presented it to royal perfection, to the utter delight of the nawabs who joined Akbar for zohrana (lunch) and aashaiya (dinner) often.

But what about the simple city folk, the people of Lahore and of course Amritsar, sitting some thirty miles from Lahore, where fish was a frequent dinner delight in autumn, winter and spring?

In order to claim fish as their own dish they took to the hawandasta (mortar) powdered a few indigenous spices and set it to marinade in the cold winters of Lahore. The fish was then dipped in rice flour and besan (gram flour), and finally double fried it to orange perfection. What is the purpose of double frying it? In order to get the extra crispiness and crunch that enhances the taste significantly.

In the sub continent, particularly Punjab Rahu the sweet river fish is the most popular choice for the Lahori Fish. It is believed that the abundance of this river fish, from Darya-e-Ravi, and the blessing of cool glorious weather of the region from autumn to spring and of course basant, the festive celebration to welcome spring, inspired the Punjabi cooks to create the Lahori Fish.

History tells us that spring was the time when the locals enjoyed eating fried pakoras,kachorian, purian, all kinds of pakwans (batter fried or fried foods), and thus they decided to batter fry Rahu, and gave the batter an orange yellow hue, the colour that represents basant. This double battered fried fish became very popular in Punjab on both sides of the border.

Presented as street food, affordable, quick and scrumptious, however as its popularity grew it poised as a lavish dinner dish served with pride at celebrations across Pakistan.

In Indian Punjab this delectable fish, or a very similar tasting fish to the Lahori Fish, is very popular and goes by the name of Amritsari Fish. It is a fish from River Biyaas, double fried in a besan batter to orange golden perfection and served with green chutney.

It is a popular street favourite, therefore to presume that the people on both sides of the Wagah Border love this delicious batter delight is a safe assumption. It is served withhari chutney or imli (tamarind) chutney, or both if one wants an extra zing.

Winters in my neck of the woods are very 'Lahoreisque', dry, cold and glorious, so when my taste buds demanded a taste of Punjab I succumbed with pleasure. A quick call to my khala (maternal aunt) in Faisalabad and I had an authentic recipe. To my delight my friend Sandeep from Indian Punjab volunteered as the taste-tester representing Amritsari Fish, while I did the honour of taste testing my very own Lahori Fish. We both left the table happy campers. Here’s from my kitchen to yours.

Wash fish and let dry, mix marinade and rub on fish, and let it rest six to eight hours in the fridge. Mix the batter by adding cold water and dip the fish fillets in the mixture. Heat oil and fry fillets for eight to 10 minutes, remove from fryer and leave it on oil absorbent paper towels until fillets are at room temperature. Reheat oil and refry fish fillets on high heat for two to four minutes. Remove from fryer and serve hot with hari or imli chutney,Lahori or Amritsari style.