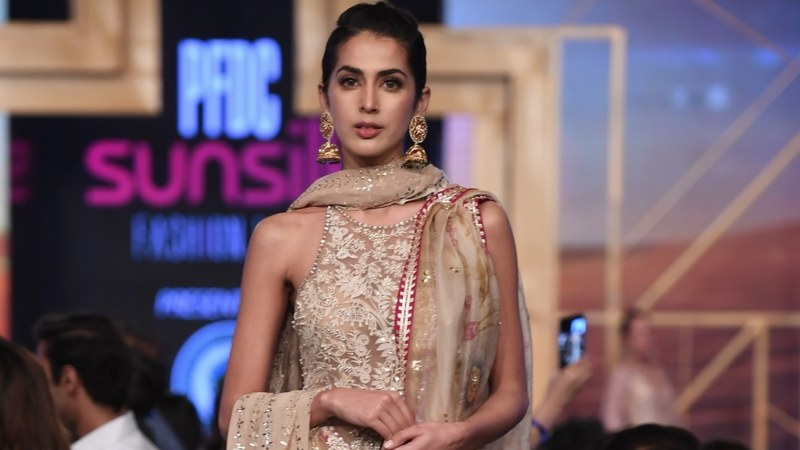 “Which show will you be attending?” the red carpet buzzed on the first night of the PFDC Sunsilk Fashion Week (PSFW). Aside from the media – destined to attend each and every show – there were attendees who had swooped in to see particular designers. Everyone had their favourites.

With a hefty designer lineup that kicked off with Zara Shahjahan and was followed up by Sania Maskatiya, Hussain Rehar, Yahsir Waheed and a finale by Fahad Hussayn, there was so much to look forward to.

In fact, the PSFW montage, overall, boasts some very intriguing names. Kudos to the council for collating a great designer lineup. And most of the shows on the first day did not disappoint at all. But before we proceed to dissecting the collections, here’s a point to ponder: what exactly is pret in Pakistan?

The PSFW is a platform that has often pronounced itself to be dedicated to pret but then, how does one define this particular genre in Pakistani fashion? Is it gota worked onto wearable evening wear that could also be worn on festive occasions? Perhaps. Is it lawn, given cutting edge twists, layered trench coats and spectacularly aligned sequins, trailing down jackets and tunics?

I would think so. Is it lehngas, worked with intricate embroideries and a bride, swathed in twinkling florals, her head covered, wearing a jhoomar, a teeka, the whole shebang? Of course not. Or is it now? What are the Pakistan Fashion Design Council’s (PFDC) thoughts on this?

Some gorgeous, utterly covetable designs trooped down the PSFW runway on the first day but not all of them qualified as pret. It’s quite evident that designers’ inclinations towards the profitable realms of wedding-wear cannot be reigned. Ever.

Here’s the lowdown on the pret, the not-so-pret and the not-pret-at-all seen last night at PSFW…

Zara Shahjahan returned to the catwalk after a long time with a show that indelibly bore her signature. It was almost akin to sifting through her website or leafing through a catalog of hers: lucid, traditional silhouettes in subtle colors, worked with smatterings of gota, kamdani, zari and zardozi.

The clothes were so utterly pretty: the angarkha paired with a chooridar, the glittering paisleys, zig-zags and florals, the translucent kurtas floating over gharara pants and the cigarette pants worked with ghungroos at the ankle!

According to the designer, the collection will be up for retail soon and it has the makings of being a hot-seller, easily traipsing from formal evening-wear to dholki-wear to Eid-wear.

Having said this, what looks great in a catalog needs to be amped up in order to make a memorable splash on the catwalk. The designs were intrinsically pretty but could have made really strong statements with a bit of drama added in – funky jewellery, perhaps? Some twists on the hair and makeup?

It’s great, though, to see Zara Shahjahan back in the lineup at a fashion week. The designer worked her traditional, old-school ethos very well.

Sania Maskatiya’s ‘Isfahan’ lilted, sweeping the catwalk in a heady mélange of pastels, mixing florals with strips of chata-pati, exquisite gota and ethnic silhouettes, given a few modern tweaks. This was Sania’s ode to the Eastern-wear that sells so well in her stores and the clothes, once again, ran the gamut from the dholki to the Eid to the formal ghazal night.

The finesse of Sania’s work also must be commended: the designer knows how to cut a neat silhouette and to work it with an aesthetic that is so enticing.

There was also a bride on the catwalk – not exactly the pret that the PSFW speaks of … but very pretty.

What a splash Hussain Rehar made! The clothes streamed out, twinkling with sequins that had a mind of their own: gathered in tufts on an all-white cape, twirling into abstract florals and aligned into digital, futuristic patterns. There was so much to love in the lineup: the all-red jacket, cinched at the waist, the capes, the two-piece suits worked entirely with sequins, the vertical strips of color flowing down gowns.

The show was high on energy as well as fashion – it’s so good to see a young designer emerge into the spotlight with a vision of his own. There are so few of them.

Yahsir Waheed is one of Pakistan’s pioneers in designer lawn and he has long been dedicated to the fabric. It was this love for print that he brought out to the catwalk. His collection was a playful mix and match of color, print and texture. What particularly caught the eye were the easy breezy jackets, balanced lazily at the shoulders and varying from printed versions to others, embellished with ethnic mirror work, and some statement pieces worked with dashes of emerald green sequins.

The collection had its strong points – some weak ones too - but what’s important is that it needs to be brought to retail. I am hoping that this wasn’t one of those shows created purely for the catwalk and fading away afterwards. Yahsir, after all, has a well-honed flair for what works in the market. Trickling this lineup to retail should be right up his alley.

The collection was called ‘Suraiya Titanic’ – you can always count on Fahad Hussayn to come up with quirky, intriguing titles and to devise quirky accessories to go with the theme. Venturing backstage before his show, I saw the designer hard at work. The models’ hair and makeup had been wrapped up and they were already dressed but there’s always so much more to a Fahad Hussayn show than these mere nitty-gritties. Chamak-patti headgear had to be fixed and sunglasses with chamak-patti wings attached to them had to be worn. Fahad, infamous for his love for eccentric accessories, was fixing them on to the models himself.

I wish, then, that these accessories had been more visible on the catwalk. The models walked much too fast for the details to be appreciated. It was only much later, when they took their final walk, that I was able to see the designs and accessories more clearly.

The first half of the show, dedicated to the designer’s limited edition stitched voile line, Fahad Hussayn Print Museum, was the highlight. There is always a peculiar kaleidoscopia unique to Fahad Hussayn’s prints and there were standout patterns in this collection, inspired by truck-art: a parrot suspended in air, faces plastered down the length of a tunic, arched clouds and florals and geometrics interspersed together. It was print with a couture spin to it. Lovely.

Following up, was the designer’s couture line, primarily comprising of heavily worked lehngas and dupattas. The quintessentially intricate embroideries and deep colour palette from the designer’s ‘Heritage Revival’ series were beautiful – but so out of place given that they were part of a show that had started out with printed lawn.

Fahad had a solo slot and perhaps he just wanted to showcase all the various lines within his design house but these were bridal pieces through and through. They didn’t fit with the truck-art theme that had started off the show nor with the ethos of PSFW.

A word about the lehnga, though, worn by showstopper Amna Ilyas – the florals entwining about the hem were so distinctive! It’s worth checking out by anyone planning out their wedding wardrobes right about now.

In fact, wedding-bound readers will be happy to know that this seems to be a very wedding savvy fashion week. Sneak peeks into collections on the second and third day also hint at plenty of dholki clothes coming out on to the runway. Oh well.

Also noticeable at PSFW is a batch of tall, thin new models who are walking the runway quite well. It’s always good to see young blood enter the modeling pool and some of these girls and boys appear to have a lot of potential. They, coupled with great styling by Nabila’s and some very good designers, are making the catwalk look good, bling and all.