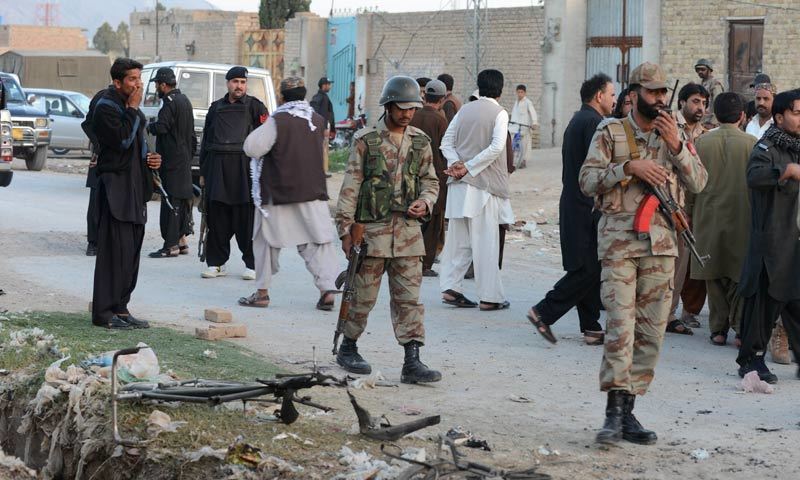 Seven soldiers were martyred in a gun attack on a Frontier Corps (FC) Balochistan post in Harnai district of Balochistan, the military's media wing said on Sunday.

It said the area had been cordoned off and escape routes blocked to apprehend the fleeing miscreants.

A large scale search and clearance operation was in progress in the area.

"Such cowardly acts by inimical elements backed by anti-state forces will not be allowed to sabotage hard-earned peace and prosperity in Balochistan," the ISPR said, adding that security forces were determined to "thwart their nefarious designs at all costs".

In a tweet, Prime Minister Imran Khan said he was "saddened to hear of" the soldiers' martyrdom in the attack.

"My heartfelt condolences & prayers go to their families. Our nation stands with our courageous soldiers who face attacks from Indian backed terrorists," he wrote.

Education minister Shafqat Mahmood also said he was "very grieved to learn about the martyrdom of 7 of our soldiers defending the motherland".

The incident comes five days after 10 suspected terrorists were killed in a gun battle with security forces during an intelligence-based operation in Balochistan's Awaran area.

“These terrorists were involved in firing on security forces, which resulted in martyrdom of Lance Naik Mohammad Iqbal on Dec 20 in the Awaran area,” the ISPR had said at the time.

Earlier in October, 14 security men — seven personnel of the Frontier Corps and as many civilian guards employed by the OGDCL — were martyred in an armed attack on their convoy on the Coastal Highway in the Ormara area of Gwadar district.

The encounter took place between security forces and a large number of terrorists on the Coastal Highway near Ormara when a convoy of the Oil and Gas Development Company Limited (OGDCL) staff was being escorted from Gwadar to Karachi.