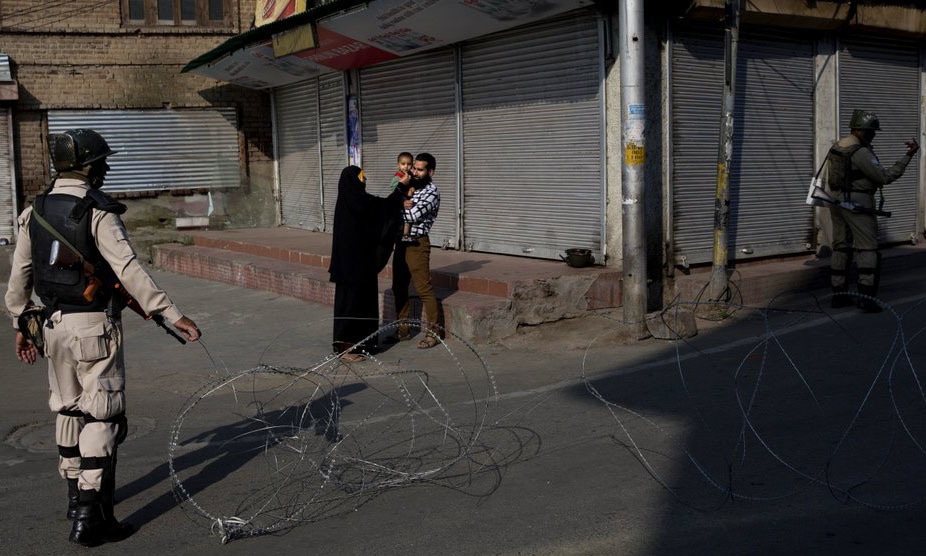 Amnesty International India on Thursday launched a global campaign in a bid to highlight the human cost of the month-long lockdown in occupied Kashmir.

"The draconian communication blackout in [occupied] Kashmir is an outrageous protracted assault on the civil liberties of the people of Kashmir," read a press release by the human rights watchdog.

"While landline telephones have been announced to be restored, their obsoletion in the recent past will fall woefully short in facilitating communication for the 8 million people of Kashmir."

On August 5, the government of Indian Prime Minister Narendra Modi stripped Kashmiris of the constitutional rights they had for seven decades through a rushed presidential order. An indefinite curfew was imposed in occupied Kashmir and elected leaders were put under house arrest.

By repealing Article 370 of the constitution, people from the rest of India will now have the right to acquire property in Kashmir and settle there permanently. Kashmiris, as well as critics of India’s Hindu nationalist-led government, see the move as an attempt to dilute the demographics of Muslim-majority occupied Kashmir with Hindu settlers.

'This is not normal, let Kashmir speak'

“The blackout has now been a month old and cannot be prolonged any further by the Indian government as it has grossly impacted the daily lives of Kashmiri people, their emotional and mental well-being, medical care, as well as their access to basic necessities and emergency services. It is tearing families apart,” said Aakar Patel, head of Amnesty International India.

“While the region of Jammu has begun to see easing of the lockdown in many districts, most of Kashmir still remains under a severe communications blackout. Depriving an entire population of their right to freedom of expression, opinion and movement for an indefinite period is akin to taking the region back to the dark ages," said Patel.

"‘Naya Kashmir’ cannot be built without the Kashmiris. The country is yet to hear from Kashmir after a month of being repeatedly been told by the Indian government that all is normal. This is not normal. Let Kashmir speak."

The statement said that while Amnesty International India acknowledges that the Indian government may have legitimate security concerns "which may merit reasonable restrictions on right to freedom of expression in certain circumstances", it does not believe the current shutdown complies with requirement of necessity, proportionality and legality set out under Article 19 of the International Covenant on Civil and Political Rights, to which India is a party.

"Instead, it deprives the entire population of Kashmir of their right to freedom of expression and opinion and access to crucial information, thus inflicting a form of collective punishment on the 8 million people of Kashmir. Lack of transparency on the criteria used to cut off all communication services and what mechanisms are available to challenge the sweeping restrictions puts India in a clear violation of its international obligations."

The press release by the organisation noted "sketchy reports coming out of the region have highlighted unattended medical emergencies, mass arrests and detentions, children and youth being picked up in the middle of the night, torture of civilians, indiscriminate use of tear gas, rubber bullets and pellet guns at protestors".

According to Reuters, pharmacists say there are shortages of drugs at some private pharmacies due to logistical issues, particularly thyroid, diabetes, anti-depressant and cancer drugs.

A Reuters reporter saw a chemist in the Jawahar Nagar area of Srinagar turn back half a dozen customers asking for common drugs on Wednesday, saying he didn’t have any left.

"All this with the backdrop of heavy military presence and a history of serious human rights violations in the region. This adds to the heightening of tensions and feelings of insecurity at a time when families are unable to contact each other and ensure their wellbeing – as many young and aged remain locked in their homes," added the press release.

"The attempts to restrict the freedom of press, like in the case of journalist and author Gowhar Geelani who was arbitrarily stopped at the Indira Gandhi International Airport, New Delhi from boarding his flight to Germany, have further compounded the effect of the communication blackout," said the watchdog.

"According to a recent Kashmir Press Club statement, at least three senior Kashmiri journalists were asked to vacate government accommodations as soon as possible, which is ‘nothing but harassment aimed at coercing journalists to toe a particular line’.

"The government’s attempts to create a public opinion of ‘normalcy’ in Kashmir while curbing the freedom of independent press have usurped the voice of the people. This excessive censure has not only affected the public’s right to know and threatened basic freedom of expression norms but also put the lives of journalists, health practitioners and service providers at risk, increasing their chances of being harassed, intimidated and detained in connection with their work," stated Amnesty International India.

“Given the chronic impunity for abuses committed by security forces in the past in Kashmir and a lack of unconditional and unconstrained access to the news from the valley, the situation calls for lifting of the communications blackout without any further delay and to listen and engage with the people of Kashmir," urged Patel.

The issue of the lockdown is also pending before the Indian Supreme Court, which has issued a notice to the federal government on all petitions challenging the revocation of Article 370. Five judges will start a regular hearing in October.