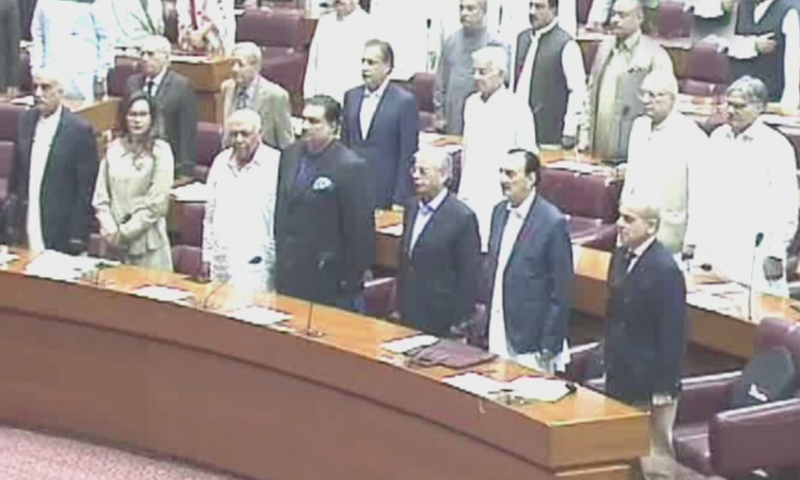 National Assembly Speaker Asad Qaiser on Tuesday adjourned the joint session of the parliament briefly after opposition lawmakers caused a ruckus in the house.

The joint session of upper and lower houses was summoned by President Arif Alvi yesterday to decide Pakistan's future course of action in the wake of India's decision to strip occupied Kashmir of its special status under Article 370. But the session was disrupted soon after beginning by protest from opposition lawmakers who pointed out that the resolution, moved by Federal Minister for Parliamentary Affairs Azam Khan Swati condemning India's "illegal actions" in occupied Kashmir, did not specifically mention Article 370 of the Indian constitution.

The protest and chants during today's sitting continued even after Qaiser assured that Article 370 will be mentioned in the resolution, following which he adjourned the session.

Members of government went to the chambers of Leader of the Opposition of the National Assembly Shehbaz Sharif in order to placate him and convince opposition members to return to the parliament.

After the session's adjournment , PML-N leader Ahsan Iqbal spoke to reporters outside parliament building and said that the opposition had protested "with a heavy heart" because the resolution presented by the government did not mention the reason due to which the session had been called: the scrapping of Article 370.

"India took such a major step and the resolution does not even mention it; this is why opposition protested today," the PML-N leader said. He added that Prime Minister Imran Khan was not in attendance even though the opposition had chosen to forgo the matter of non-issuance of production orders [for arrested MNAs] to show unity and discuss the Kashmir issue.

He further said the the foreign minister, who is currently out of the country, should have returned by a chartered plane to brief the parliament on the situation even if it was for a day.

Special Assistant to the Prime Minister (SAPM) on Information Firdous Ashiq Awan also addressed opposition's protest in a conversation with media outside Parliament House and said: "We respect the opposition's wishes and will make the additions they are calling for because no controversy should be created on a resolution supporting the rights of Kashmiris."

"Kashmiris are looking towards Pakistan in this time of dire need," she added. "We would like them to know that they are not alone; Pakistan will continue its diplomatic support for their cause and raise the matter on all relevant forums.

"We are looking to raise the matter in the United Nations and ask the forum to look into India's violation of their conventions."

'Kashmir was and will remain disputed'

Meanwhile, Sharif met Azad Jammu and Kashmir (AJK) Prime Minister Raja Farooq Haider in his chamber and said that Pakistan will continue to stand alongside Kashmiris.

"No matter what India does, Kashmir was and will remain disputed [territory]," Sharif said. He also expressed concern over the health of Jammu Kashmir Liberation Front (JKLF) Chairman Yasin Malik.

Haider briefed Sharif about the situation in AJK and said that the Indian forces had been targeting civilians by using cluster bombs from across LoC.

"If [Indian Prime Minister Narendra] Modi thinks Kashmiris will give up their right to self-determination, he is mistaken," Haider said.

Opposition parties had demanded that a joint session be convened soon after media broke the news of India's decision to repeal Article 370. PPP Chairperson Bilawal Bhutto-Zardari was the first opposition leader who had called for immediately summoning the joint session of parliament. He then flew to Islamabad from Karachi to participate in the joint session.

“This House may discuss the recent surge in unprovoked firing and shelling on civilian population and use of cluster bombs by Indian forces in Azad Jammu and Kashmir; deployment of additional troops and atrocities in Indian-occupied Jammu and Kashmir and recent developments,” said the agenda issued yesterday by the National Assembly Secretariat for the joint sitting.

Meanwhile, a Corps Commander meeting under the chairmanship of Army Chief Gen Qamar Javed Bajwa is underway in Rawalpindi to discuss the deteriorating situation in occupied Kashmir and the Indian aggression along the Line of Control, reported Radio Pakistan.

Yesterday, India's ruling BJP stripped Kashmiris of the special autonomy they had for seven decades through a rushed presidential order. An indefinite curfew — that has entered its third day today — was imposed in occupied Kashmir and elected leaders were put under house arrest.

By repealing Article 370 of the constitution, people from the rest of India will now have the right to acquire property in IoK and settle there permanently. Kashmiris as well as critics of India’s Hindu nationalist-led government see the move as an attempt to dilute the demographics of Muslim-majority Kashmir with Hindu settlers.

Furthermore, Indian Home Minister Amit Shah, who is also president of the BJP, moved a bill to bifurcate the state into two union territories — one, Jammu and Kashmir, which will have a legislature, and the other, Ladakh — to be directly ruled by New Delhi.