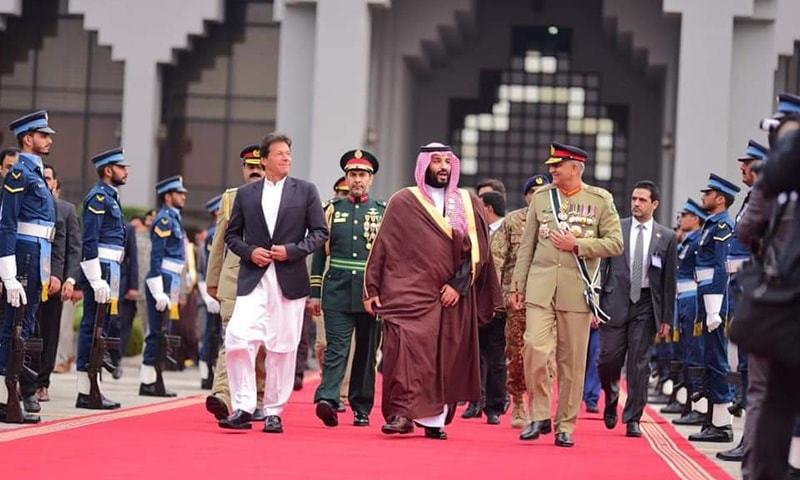 At a joint press briefing prior to Prince Mohammad's departure, Prime Minister Khan thanked him and expressed his happiness over the royal's visit, hoping that he would stay longer next time "so I can show you the beauty of Pakistan and the northern areas."

The prime minister also thanked the visiting dignitary for his announcement this morning to release over 2,000 Pakistani prisoners languishing in Saudi jails with immediate effect.

"I woke up this morning and when I looked at my mobile phone, I realised ─ after your statement last night saying that you would be Pakistan's ambassador in Saudi Arabia ─ that if you stood in elections here, you would get more votes than me," the prime minister joked, addressing the crown prince who was standing at a podium to his right. "You are extremely popular," he added.

"I want to thank you on behalf of the people of Pakistan" for announcing the release of Pakistani prisoners, the prime minister said, also thanking the crown prince for the agreements worth $20 billion that had been signed during his visit.

Prime Minister Khan also noted that with the signing of the new agreements, the existing relationship between the two countries has managed to expand beyond its "narrow confines" and is now "developing into other spheres".

"But what I feel is that this is just the beginning," he asserted. "I think Pakistan's geo-strategic location, the comparative advantage Saudi Arabia has in certain areas, and the advantages that Pakistan has ─ the combination augurs very well for the future."

"We want you to consider Pakistan your second home. The PM House, where you were staying, rest assured that when you are in Pakistan ... [you can] consider it your own house and come and stay there," he told MBS.

Prince Mohammad responded to the prime minster's offer by saying that he also feels "at home in Pakistan".

MBS once again reiterated his faith in the country's leadership. "There is great leadership here to put Pakistan in the right position. We can see it happening."

"We saw the Pakistani economy grow by 5 per cent in 2018 so we believe that Pakistan has huge potential, it could be one of top 20 economies in the future, easily. If the efforts of the leadership, the people of Pakistan, and their allies come together, definitely it can reach that one day."

"So because of that, we believe in Pakistan. Because of our long relations [...] we want to be part of that journey and we want to risk our money, to risk our efforts, to start from day one," he explained.

"What we did today, it's the beginning and we hope in the close future we do more and more partnering with Pakistan," the crown prince concluded.

Prince Mohammad bid goodbye to the army chief, the prime minister and minister Khusro Bakhtiyar on the red carpet before returning to his plane and waving to the crowd from the top of the steps as he departed. The crown prince's next official visit is a trip to India scheduled for Feb 19.