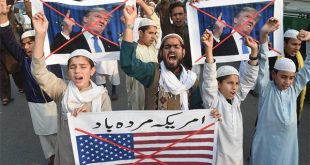 WASHINGTON, Sept 2, (AFP): The US military plans to cancel $300 million in aid to Pakistan due to Islamabad’s lack of “decisive actions” in support of American strategy in the region, the Pentagon said Saturday. The US has been pushing Pakistan to crack down on militant safe havens in the country, and announced a freeze on aid at the beginning of the year that an official said could be worth almost $2 billion.