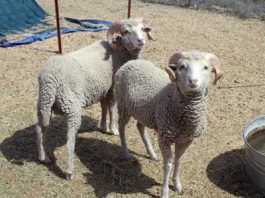 KUWAIT: A Kuwaiti accused unidentified people working for a ruling family member of stealing sheep from his ranch, Al-Rai daily reported yesterday. Case papers indicate that the citizen filed a complaint at Qashaniya police station, saying that he had purchased a ranch from a ruling family member for KD 100,000 and gave a KD 10,000 in down payment pending completing the deal and transferring the ranch’s ownership to him.

The citizen added that he accordingly moved 100 of his sheep into the ranch, but the ownership transfer process was delayed due to the COVID-19 outbreak as well as new government regulations concerning transferring ranch ownership. He added that the ‘sheikh’ demanded payment of the balance, but he refused until he got the ranch’s deed.

The citizen said three days prior to filing his police report, three unidentified people showed up at the ranch, kicked out the guards and took his sheep. He directly accused people working for the sheikh of being behind what happened. A case was filed and further investigations showed that the stolen sheep were kept in a house owned by the sheikh. A force was dispatched to the scene, where three laborers fled on spotting the police, who removed the sheep. Further investigations are still in progress.